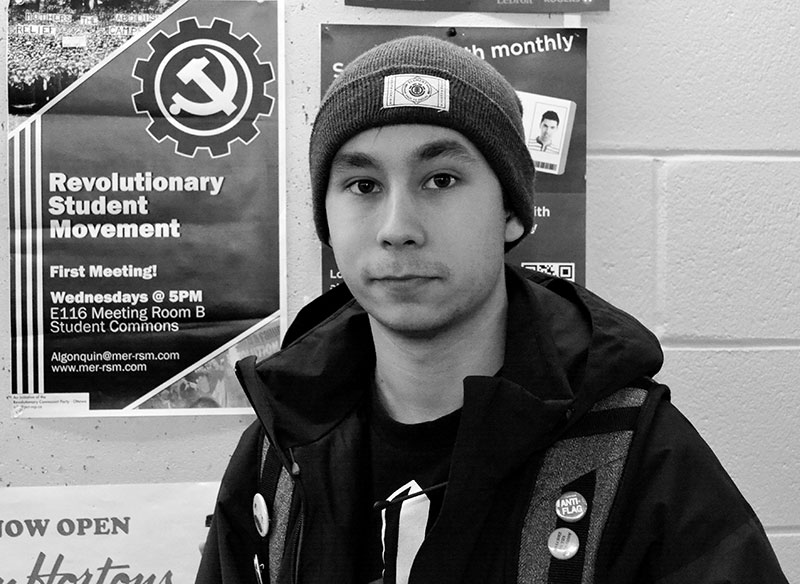 The college could see a new voice given to the student body in the form of the creation of an Algonquin chapter of the Revolutionary Student Movement.
Regi Neppel, a 20-year-old horticulture student, became one of the lead organizers of the Algonquin chapter in early November. Neppel and fellow RSM organizer Brendan White, an 18-year-old marketing student, have been papering the school in bright red posters to attract attention to their weekly meetings.
“The RSM isn’t explicitly a communist group, it’s really more anti-capitalist and about building a student movement that is in line with the broader working-class, and not just something that ends at making tuitions more affordable,” said Neppel.
Part of communist student activities at an early age, Neppel saw the college as the perfect environment for the development of a Revolutionary Student Movement, and is optimistic about its future.
“Algonquin is one of the first college campuses to have an RSM group, and the class background is a lot more promising because it’s people who come from more of a blue-collar or working-class background,” said Neppel.
The group’s third meeting of the month on Jan. 22 saw the finalization of their constitution and a step towards a revolutionary course of action. The first step is organizing, educating, and forming a dialectic through which various anti-capitalist ideologies can come together.
Faris Lehn, Algonquin’s clubs and communities coordinator, welcomes the new revolutionary presence on campus.
“The RSM is not a club, but I have been meaning to establish contact with them to see if they want to become more formal,” said Lehn.
For many years, the college would not allow political clubs on campus. However, after learning of Lehn’s proposal and discovering the recent change in rules, the members of the Revolutionary Student Movement welcome the possibility of becoming a legitimate organization in the coming months.

Originally published in the Algonquin Times on 06 Feb 2014