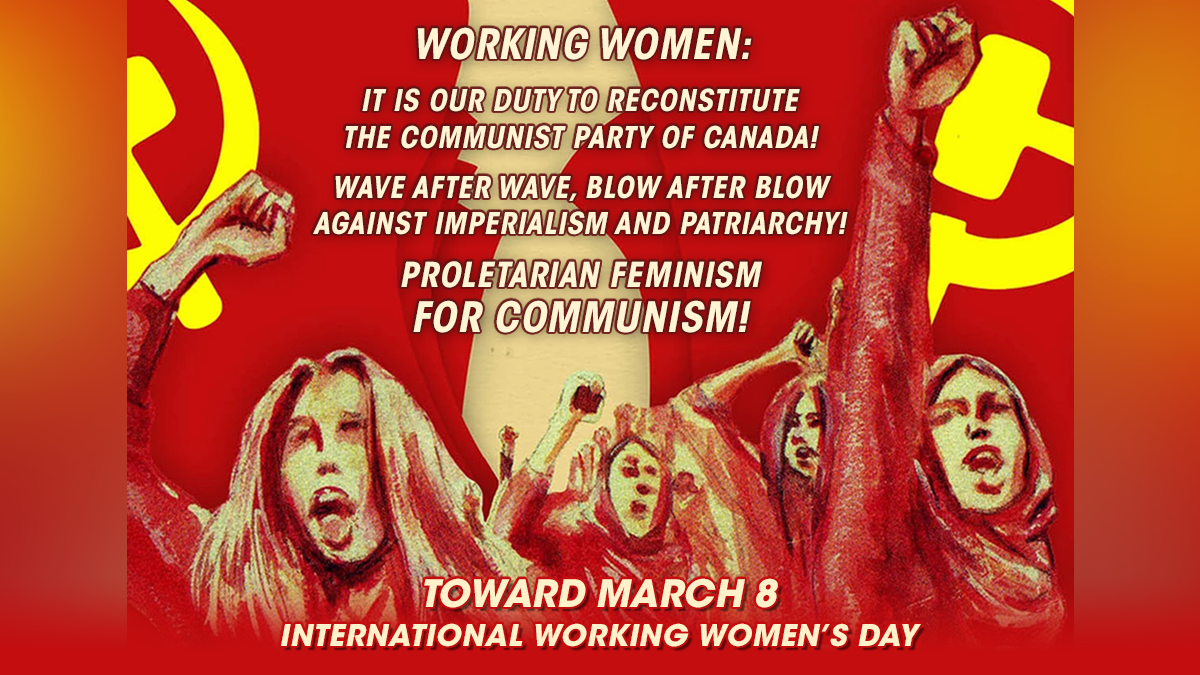 A message from the Revolutionary Student Movement – Greater Toronto Area:

March 8 marks International Working Women’s Day (IWWD). This special day was established over a hundred years ago at the 1910 International Socialist Women’s Conference, at which the proposal for the establishment of IWWD was lead by Clara Zetkin. IWWD was established in an effort to unite and bring proletarian women into the struggle for Communism.

This revolutionary occasion is often diluted and diminished both by liberals on one end and revisionists on the other. Both sides sing false songs about how women’s oppression no longer exists by reducing it to “identity politics” or distracting from the fact that the real solution to women’s oppression is through socialism. We must not be distracted: the liberation of women depends on the abolition of private property and capitalism itself. Therefore, the correct orientation for Communist women is to take up the struggle to conquer political power for the working class through People’s War, which can only be achieved with a Militarized Communist Party.

Today, the principal task of Communists all across the world is to constitute or reconstitute their Communist Parties. This is especially urgent in our country, where revisionism has deprived the working class of its organized vanguard for nearly a century! This task must be taken up amidst the class struggle and ideological two-line struggle. Proletarian women, who face a double oppression as workers and as women, are a key element to the reconstitution of the Communist Parties. It is crucial for working women to develop strong class consciousness that will make them capable of grasping problems faced by the working class as a whole and providing correct solutions to them.

To mark International Working Women’s Day this year, the Revolutionary Student Movement will post one profile per day on our social media about a revolutionary woman, building toward March 8. In the lead up to the occasion and on March 8 itself, there will be actions to educate, agitate, and propagandize the working women’s struggle – so stay tuned for upcoming announcements. Additionally, the RSM intends to conduct social investigation into the conditions of working women in the Greater Toronto Area and across Canada. If you would like to join in this campaign, reach out to us directly through our social media (Instagram, Twitter, Facebook) or via toronto@mer-rsm.ca.

Women! Unite around the revolutionary slogans:

It is our duty to reconstitute the Communist Party of Canada!

Wave after wave, blow after blow – against imperialism and patriarchy!