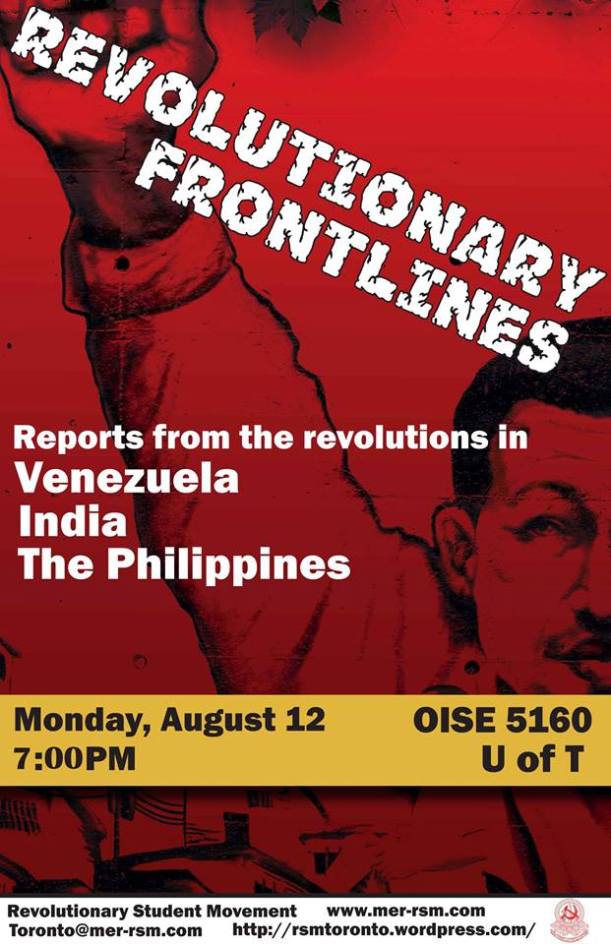 Join to learn more about the ongoing revolutionary processes in Venezuela, India and the Philippines. A comrade will report back from his recent experience doing research in Venezuela in a community organized by an autonomous revolutionary organizations, while two comrades from Toronto will give us insight on the struggles led by Maoist rebel movements in India and the Philippines. The presentation will be followed by a discussion period.

Childcare will be available at this event. Please email revolutionarystudentsto[at]gmail[dot]com for more info.

This event is part of a Quebec-Ontario speaking tour organized by the Revolutionary Student Movement and its counterpart in Québec, the Mouvement Étudiant Révolutionnaire (MER-RSM)

Indignation and a rejection of capitalist power is on the rise everywhere in Canada. The masses are chomping at the bit for new ideas and strategies to launch a revolution that is capable of ending the cruel and unjust system that is poisoning our lives. Given the advanced state of revolutionary movements elsewhere, the Canadian masses have much to learn from foreign revolutionary struggles. This panel will present the experiences of various revolutionary groups -particularly from Venezuela, India, and the Phillipines- that have made significant headway in the struggle against capitalism and successfully established a democratic, socialist counter-power in their respective countries.

In Venezuela, the CRBZ is struggling autonomously, in a context made more favourable to anti-capitalist forces by former President Hugo Chávez. It has organized dozens of communes where the people are learning to govern themselves while being at the frontlines of the resistance against fascist paramilitary forces. Meanwhile, in India and the Philippines, revolutionary Maoist groups have been involved for decades in a protracted armed struggle against their respective states. In so doing, they have sown the seeds of people’s power among the most marginalized groups in their society and accumulated invaluable practical experience. All anti-capitalists are invited to come learn more from and discuss the experiences of these major revolutionary organizations and struggles.