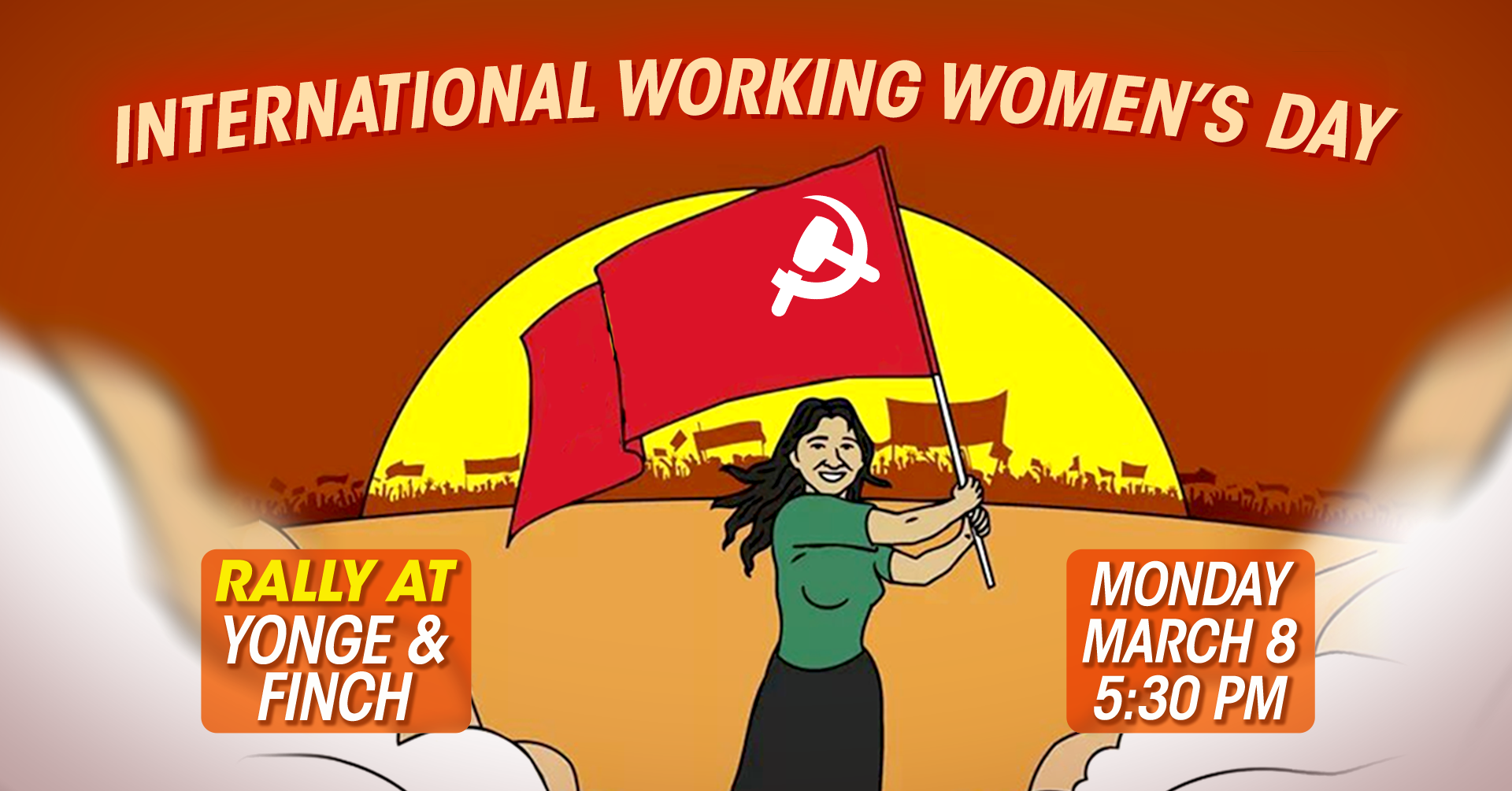 Join us for a rally on International Working Women’s Day! For over 100 years, this day has been an occasion to advance the women’s movement as part of the revolutionary struggle against imperialism, capitalism, and patriarchy around the world.

Imperialism, as the highest stage of capitalism, unleashes horrors and violence on the oppressed peoples of the world in order to enrich itself. Women of the oppressed classes face the worst violence: the most exploitative jobs, harassment at work and on the streets, sexual exploitation, backbreaking domestic labour and abuse at home – the list goes on. Here in settler-colonial Canada, the Canadian State pursues a centuries-old policy of genocide against Indigenous Nations, targeting Indigenous women in particular. This appears most clearly in the crisis of missing and murdered Indigenous women, which the State continues to perpetuate.

We are in the midst of a historic crisis of imperialism. Every day, imperialist powers like Canada pump more money into wars of conquest and aggression, desperately trying to find profitable ventures while every day it is less and less feasible to maintain them. We see this crisis in the response of the ruling classes to the deadly COVID-19 pandemic. The capitalists impose mass layoffs and evictions in a futile effort to keep themselves afloat, while the State works overtime to maintain the whole rotten order, yet it can never solve the problems inherent to capitalism. Amid such conditions, working women have been among the most harshly hit by the dying throes of this system.

Imperialism is drowning – and it is time for the workers and oppressed peoples of the world to finish the job! Make no mistake, even in its sick and rotten condition, it is still a brutal oppressor. It will stop at nothing to preserve the system of private property and the oppression of women which is rooted in this system. Only a Militarized Communist Party, mobilizing the masses for People’s War, is capable of smashing the throne of capital and ensuring the real emancipation of women. Today there is no genuine Communist Party in Canada, and so it is our historical duty to reconstitute it! Only with the active participation of proletarian women will the Communist Party of Canada be reconstituted!

We call on all people whose blood boils with fury at exploitation and injustice to join us in the struggle against imperialism, capitalism and patriarchy! Revolutionary vigour alone won’t keep COVID-19 and the cold away, so be sure to dress warmly and bring a mask.

Women of the working class: it is our duty to reconstitute the Communist Party of Canada!

Wave after wave, blow after blow – against imperialism and patriarchy!

— An initiative of the Revolutionary Student Movement – Greater Toronto Area